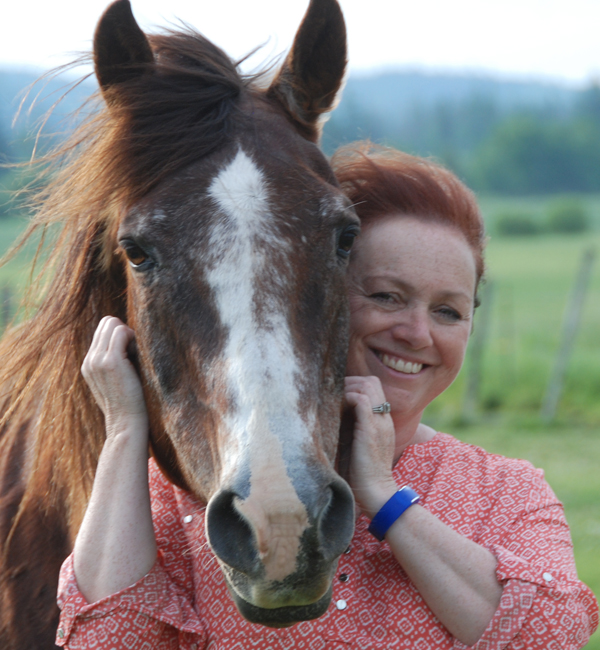 
Joan Marie Gjos has worked in the Emergency Medical Field since 1982 as both a land and air paramedic as well as a Lead Communications Officer. In her thirst for knowledge she went on to get her Bachelor of Science Degree in Psychology with a focus on learning and motivation. She has also gone on to get certificates in Mental First Aid and ASIST.

Joan Marie received a paint Barbie horse as a young girl and there began her love of horses. This fascination never developed in too much more than her Barbie having many great adventures. This horse interest turned into a young adult woman collection of rocking horses. Joan Marie never shared her reason for this collection but she will now. Rocking horses represented how she felt with no dreams but just rocking in place and not getting anywhere. This was a difficult time in her life when life felt stagnant with no hopes or dreams.

In 1997, Joan Marie became a single Mom of two beautiful young girls who she knew deserved to have dreams and grow in to strong young women. It would take three years before the next transition for this new family unit. Joan Marie saw an article in a magazine where horse back riding would be a great form of exercise. This was the beginning of their new family filled with dreams and strengthening their family unit.

Joan Marie and her two daughters began horse back riding at a riding place in Sault Ste. Marie and all three fell in love with horses. Joan Marie began riding once then twice a week; she just could not get enough of the smell and warmth of being around horses. It wasn’t long before she decided to buy her first horse whose name was Jack. Jack was at the end of the road there is self-discovery with horses as your partner buckskin Canadian quarter horse cross. He was strong, beautiful but only green trained horse. There was such a thrill owning her own horse; the relationship became a strong one quickly. Jack would always come running when Joan Marie entered the field and one time another overly excited horse ran at her and Jack put himself between them to protect his new owner.

There were also some problem areas with Jack and Joan Marie’s relationship with both being green the relationship had growing pains. Jack was nervous under saddle when no other horses were around and he would buck. After two times of being bucked off and the second time causing a hairline fracture in her back, Joan Marie knew it was time to find Jack a new home. Not knowing much of how to go about this Joan Marie relied on the people around her and Jack was sold at auction. In such situations, you don’t usually hear about the horse once it is sold but this was not the case with Jack. His new owner found a way to get in touch and to this day Joan Marie is able to watch the new bond Jack has with his new partner.

The farm at the end of the road was found in Echo Bay just about 30km east of Sault Ste Marie. The horse numbers grew to ten within the first year. One of the horses named Indy was sickly when he arrived and with in a short time he was injured and unable to walk. He had his two front legs braced as he needed to get up. Although the vet did not hold out much hope for Indy Joan Marie saw too much life and fight in Indy’s eyes to give up on him. Indy did heal but it was clear he would never be ridden which was fine as there was lots of hay on this farm so why not have him as a lawn ornament. That was not ok with Indy he wanted a job.
Two years later in 2014 Joan Marie was ready to hear what Indy wanted and it came to her after attending a 911 Communications Officer conference in Vancouver. There was a speaker who talked about the rewards of working with horses and this had nothing to do with riding horses.

In 2015, Joan Marie found Horse Spirit Connections through contact information listed on the conference flyer and here began one of the most rewarding chapters in her life. Through the teachings of the FEEL program she was able to find a stronger connection with her horses as well as those around her. One of the added bonuses is now Indy had a job to do as teacher and partner and he also began to be the proud horse he wanted to be.

Joan Marie Gjos is now a FEEL graduate in June of 2016 and has begun her new adventure welcoming clients to her Road-ay-o Ranch the farm at the end of the road where self discovery is at the for front of tis adventure.