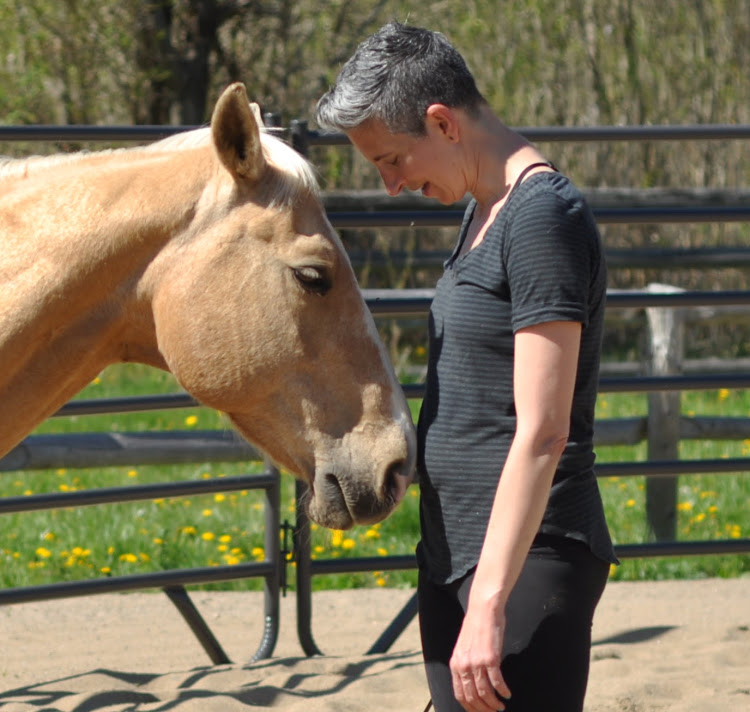 
Kendra has been compelled by the magic of horses since childhood.   Her earliest encounters with these majestic beings were facilitated by her grandfather.  An adventurous, animal-lover himself, he would organize special excursions to a friend’s equestrian centre where Kendra was free to explore the aisles of the stable, listening to soft nickers from the resident equines and gently connecting with any velvety muzzles that came to greet her.  But for a kid growing up in Toronto, regular horse time was out of the question until a school “activity day” in 1987 opened a door.

Kendra, then 13 years old, registered for a riding lesson at Redstone Farm in Richmond Hill.  Engaging with horses more closely was exhilarating and she was hooked.  The activity day turned into summer camp and summer camp turned into weekly riding lessons.   Throughout her adolescence, time spent at the farm was both exciting and nourishing and the relationships she cultivated with her horse teachers over those special years remain vivid to her to this day.  But when university began, recreational riding became difficult to sustain.

Kendra attended the University of Waterloo where she developed new interests and experiences.   Driven by a deep existential curiosity, she pursued studies across a wide range of disciplines in the social sciences and the arts including sociology, women’s studies, psychology and eastern religions, graduating with a BA in 1998.  Following her graduation, Kendra’s interest in social justice led her to roles at Health Canada’s Women’s Health Bureau and Human Resources Development Canada’s Youth Employment programming.

While these systemic approaches to social and personal development were intellectually satisfying, Kendra was called to support people’s growth using more relational approaches.   Kendra began her Masters in Social Work at Wilfrid Laurier University in 2000 focusing on practice with culturally diverse populations from an anti-oppressive approach.   Her field placements focused on women’s mental health both within Ontario and internationally, completing practicums in Waterloo Region and in Nagpur, India.

Upon her graduation in 2002, Kendra focused her career on working with survivors of gender-based violence and provided counselling and advocacy at domestic violence shelters, sexual assault centres and community health centres in both Canada and the United Kingdom.  Propelled by her interest in Eastern traditions, Kendra pursued training in Mindfulness Meditation and compassion-based practices and incorporated these methods in both her work and personal life.

In 2018 Kendra decided to make a pivot in her career.  In her explorations of new paths forward, Kendra followed the wisdom that satisfaction in the present can involve the return to activities that were beloved in childhood.  When Kendra learned of the FEEL™ model; one which is based on deep interconnection with the horse as a teacher and healer, it was a natural fit.  Her practice now focuses on cultivating holistic wellness, joy and authenticity through equine-based counselling and coaching models. Kendra is a queer-identified practitioner and is committed to providing a safe space for other queer and trans folks from across the gender spectrum.  Kendra brings humour, warmth and tenderness to healing relationships.