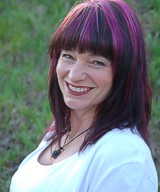 
Pink sequins twirling, twirling, twirling as the ballerina spins on top of the beautiful white horse.  The wind blowing by and the flush of exhilaration of the win as the powerful Thoroughbred crosses the finish line with her jockey.  Blue skies and sunshine warming the hills as the cowgirl and her horse gallop along.  That’s what this little girl’s dreams were made of.

Lisa’s earliest memory of horses is about the age of 3, and it was love at first sight. Living in a city at the time, seeing horses was not a common occurrence.  But, at the age of 5 nirvana was discovered.  Lisa’s family moved to the country side of Western New York.  Even though Lisa did not have horses of her own, the neighborhood did.  Bliss!  Lisa’s heart bloomed there as she was able to share her passion with the neighborhood kids. She was always dreaming and conspiring to have a horse of her own.  This dream came to fruition when a brown and white paint mare with one blue eye came into her life.  It did not take long until Lisa had her own herd of Tiki, Rusty, Apache and herself.  Many of life’s lessons were learned from those special horses!

When Lisa was 17 she graduated high school as a junior.  She then moved to Colorado to begin her college adventure.  Lisa’s chosen path was art.  Her passion and abilities won her awards.  After a couple of years, she discovered that she could not live within the box of other’s imaginations and her passion for art was extinguished.  Her herd had been dispersed so a new path was forged.  Lisa followed her gypsy soul to Boston, Massachusetts.  There she attended Northeastern University and graduated with honors from their cardiac physiology program.  But, that by itself was not enough.  Lisa wanted to touch people and make a difference in their lives.  Lisa went on to study massage therapy at the Finger Lakes School of Massage in Ithaca, New York.  Needing a place to practice, Lisa opened her own business becoming an entrepreneur in several endeavors.

After getting married and setting up shop in Ellicottville, New York Lisa needed her own herd.  A happy horse owner she became again.  During this time Lisa was introduced to the concept of Natural Horsemanship.  Intrigued, she became a certified Natural Horsemanship trainer in 2004.  A new world of horses and understanding was discovered.  Lisa’s passion grew into starting her own farm, Point Break Friesians.  Lisa dedicated herself to breeding and training this magnificent breed of horse.  During this journey she also studied other modalities such as Aromatherapy, Masterson Method, Red Light Therapy and Reiki Master giving her more tools in her quest for helping others.

Then one day Lisa realized that she had all of this knowledge and a herd of incredible horses and it was still not enough.  Lisa wanted to share her passion with the world.  She wanted others to discover the passion and healing power of horses. The FEEL program was discovered and a deeper journey began.  Graduating as a FEEL practitioner in 2018 Lisa now has the tools and invites you into her space and onto her farm to share in the heart of the horse.  Join Lisa on her farm for one on one sessions or a workshop.  Begin your journey of self discovery and build stronger relationships.  Let the horse enlighten you and show you how to live as your authentic self.