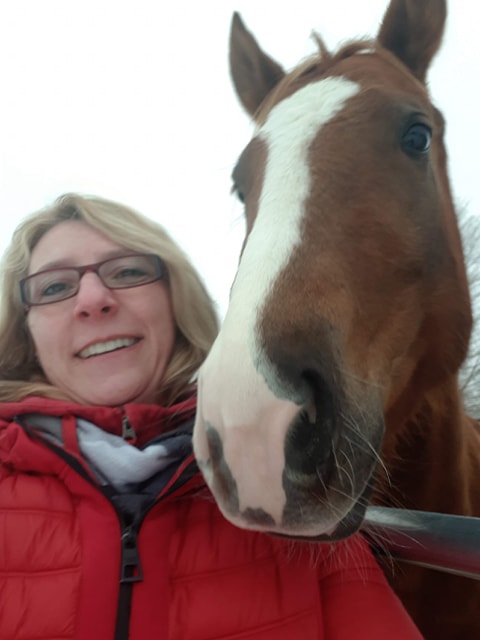 
Since she was little child Lynda has always been fascinated by animals and since her youth, they were always part of her life. Her big dream was to have her own horse since she was 9 years old. Because her godfather loved horses and promised her a horse. But his mare fell ill and she had to be euthanized. So she was not lucky enough to have her horse and the promise was not kept by her godfather. But all her life, her inner child still hoped to have one.

Lynda has gone through many challenges in her life. Thanks to the animals, it helped her a lot. In 2008, she attended a grooming training for personal purpose. The wellbeing of animals is very important to her. She heard about animal massage during her grooming training. So in 2011, she got trained by Chantal Robinson, one of Quebec’s pioneers in animal massage therapy. Lynda is someone ahead of her time.

In 2013 Lynda had a spiritual awakening that began to awaken in her life, thanks to an energetic treatment received by her massage therapist. Thanks to this Reiki treatment, she was lucky to have an emotional release that was caused by her childhood trauma. She believed in this beautiful divine energy that can help people to free themselves from an emotional blockage that is often suppressed and even sometimes forgotten unconsciously.

She decided to become a Certified Reiki Master and completed her level One, Two and Three between 2014 and 2015 and to teach others. In 2016 she took a course in Animal communication with Delphine Mirleau / Energy healer. Also, she decided to become an Energy Integration Therapist practitioner in 2017-2018. She’s was able to help people and animals with this beautiful divine Energy.

In 2018, her husband offered her for the 50th anniversary, the gift of her dream! A beautiful mare named Dora at the time Lynda has renamed her Celestina. Before getting Celestina for her birthday! This mare had contacted the Energy healer Delphine Mirleau who teaches animal communication. Subsequently, Lynda heard the call of the horses. Lynda decided to do her FEEL training in Quebec in 2019 and to become a facilitator to work with horses too.
Lynda offers workshops for people wishing to learn Reiki for humans and animals. She offers holistic care and awareness awakening workshops to people with different needs and she’s teaching workshops of animal massage.

Lynda wants to help people who have emotional blockages, who are suffering inside, who lived through childhood traumas and were helped by the therapist and horses or simply people that want to have nice conscious awakening experience. She wants to inspire them to take their power in their own hands and to care for themselves.

Her mission is to help people and animals reconnect with their hearts. Help them find their inner peace and regain their freedom of spirit in their lives with the complicity of horses. Because they are the therapists!!! The soul is at the heart of the solution.